This was a high-paced match decorated with wonderful tries, a heroic comeback by St Gerard’s and, ultimately, an injury-time winner.

St Fintan’s dusted themselves down and cranked up the pressure from a lineout, Rory O’Connor-O’Hehir peeling to the back and feeding brother Tadhg on the charge.

The former repositioned to take the next ball on and centre Haas’ fend was too strong for a try which Ben Barnes converted from the right for 7-5 in the eighth minute.

Haas was quickly into the poach position for a penalty Barnes used to secure a lineout inside the St Gerard’s 22.

The flow of the game was stymied by the battle at the breakdown. Rohan O’Shea nabbed Desmond for a turnover on the floor. Prop David O’Kane-Clarke answered with a steal.

Then, a counter ruck by Rory O’Connor-O’Hehir and a quick tap-and-go by captain Robert Harvey created the opening for simple passing to put Ryan Curley outside Ronan Kelly for Barnes to convert in the 22nd minute.

The O’Connor-O’Hehir brothers combined to release Curley up the left and Harvey’s counter-ruck and quick decision to run another penalty kept St Gerard’s on their heels.

The big No 8 took his chances on the blindside of a scrum where Arthur Walsh was his match in a one-on-one.

St Fintan’s made a bad habit out of taking the ball into contact and losing it, even though St Gerard’s, led by Charlie Paterson, were staunch in defence to keep it 14-5 at the break.

The frantic nature of the opening to the third-quarter left too much open to chance, St Fintan’s failing to send numbers to the ruck and St Gerard’s unable to play through the phases.

Perhaps, it was a testament to how important the next score would be, Curley nearly getting away down the tramlines.

Instead of getting frustrated, St Fintan’s used Haas and Adam Coffey to make ground and Rory O’Connor-O’Hehir was on hand to drive low for the try in the 39th minute. 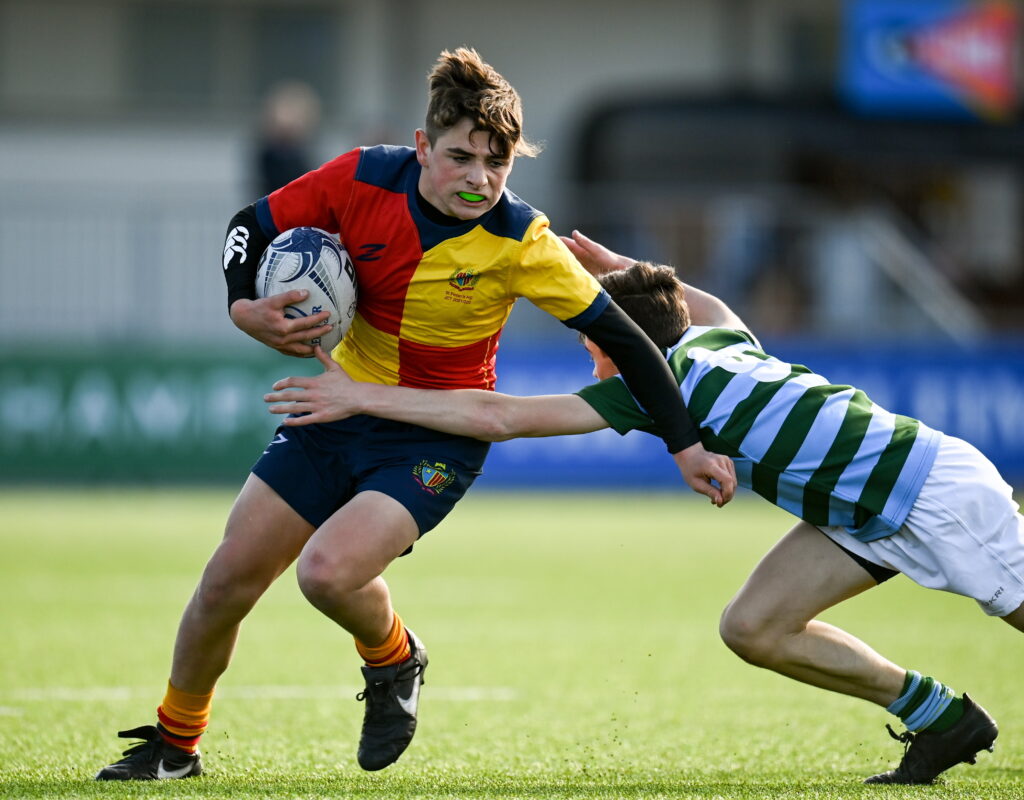 It looked like Whitten was about to answer in kind when losing his footing on a cutback.

Not to fear, a sweeping movement enabled St Gerard’s full-back Murray to get around the outside of O’Shea and into the left corner for 19-10 in the 44th minute.

They were in a groove, Murray breaking forward at pace and Desmond’s left-handed floater finding Ronán Kelly with a lot to do.

Yet, the right-wing had the speed and agility to beat three players for a stunning try to leave four between them in the 48th minute.

Suddenly, St Fintan’s looked leg-weary and the decision to take a scrum on their own 22 when captain Harvey had just won a penalty backfired.

They knocked on in the process of exiting and required Rory O’Connor-O’Hehir to come to the rescue five metres out.

Tired limbs and minds led to more mistakes and St Gerard’s launched another attack straight from a scrum, long passes putting Dempsey over on the left to complete a 15-point comeback in the 55th minute.

It was all to play for. There was one point in it. The Sutton school came hunting one chance, one kick to win it, yet another ruck penalty giving them access to the 22.

When the power game didn’t work, Haas zigged and zagged through a forest of bodies for a try that sent the St Fintan’s fans into a state of delirium.