The warm comradery onshore masked the hearty competition off it, as Howth played host to the Wave Regatta 2022.

With a real edge to the nor’easter of 25 knots plus (very plus at times) and the tide flooding north against it, the second day of Howth’s Wave Regatta proved to a case of Waves Plural and then some in the Lambay Race. But it made for a very special day’s sailing for those boats allowed to go.

For the powers-that-be had reckoned all the smaller One-Designs should be kept safely in port. But the biggies with real lids – or most of them – went out and bruised and battered their crews in this annual highlight around the beloved island on a standalone basis, as the original plan for an extra windward-leeward morning race had been dropped in face of the earlier adverse conditions. 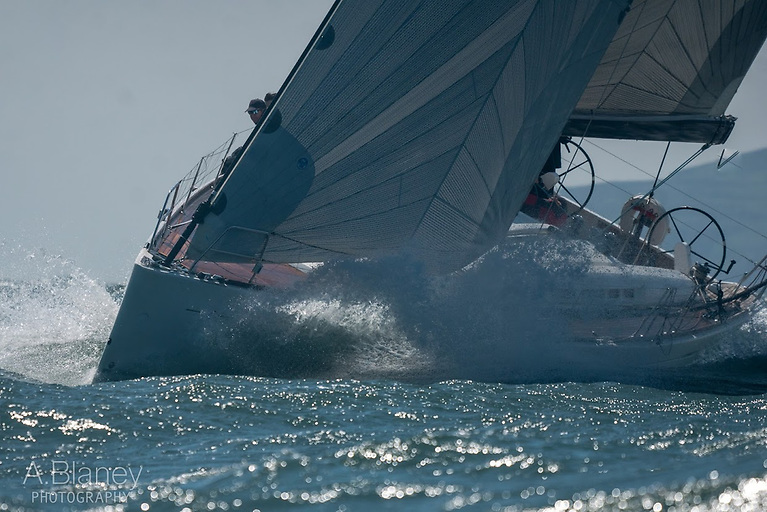 We said “or most of them” advisedly, as some owner-skippers decided that big damage this early in the season was not a good career move. Yet the many who did take on the challenge had some remarkably close racing throughout, and were rewarded by a slight softening with the sunny conditions in mid-afternoon before the wind – undiluted from Scandinavia – settled rawly in again for the evening.

It was a case of “local boy makes good” in the exalted environs of Class 0, for although Pete Smyth sails his Sunfast 3600 Searcher from the National YC these days, the Smyths are a Clontarf clan and he cut his sailing teeth with family racing from Howth. Searcher revelled in the surfing conditions and carved out an IRC win of nearly three minutes from the Jones family from Crosshaven with the J/122 Jelly Baby, who nevertheless retain the overall lead, while Patrick Burke (RIYC) stayed in the hunt with third for his First 40 Prima Forte under IRC. 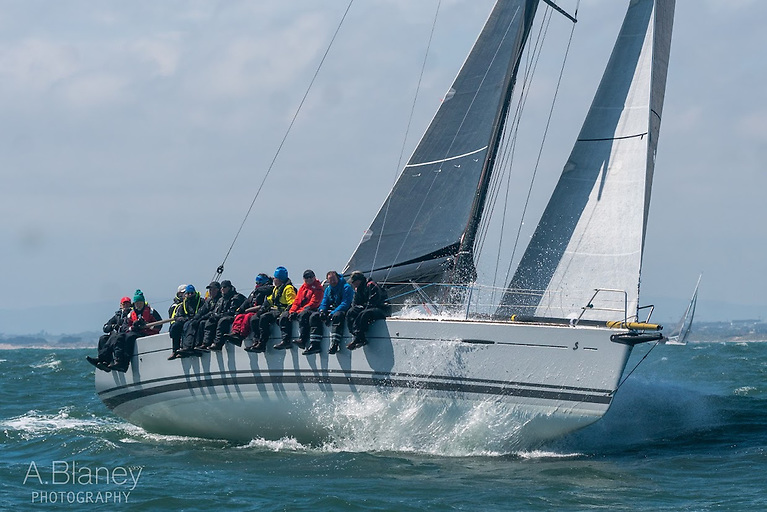 Belfast Lough being “Nor’easter Central”, John Minnis’s A35 Final Call II (RUYC & RNIYC) was revelling in the familiarly rugged going, and opened out a 4.5 minute lead on the water in this long race from Mike & Richie Evans’ J/99 Snapshot (HYC), which translated into a four minute win. It was good going for Snapshot, as she finished ahead of all the J/109s, of which the best – in third overall – was Andrew Craig’s Chimaera. 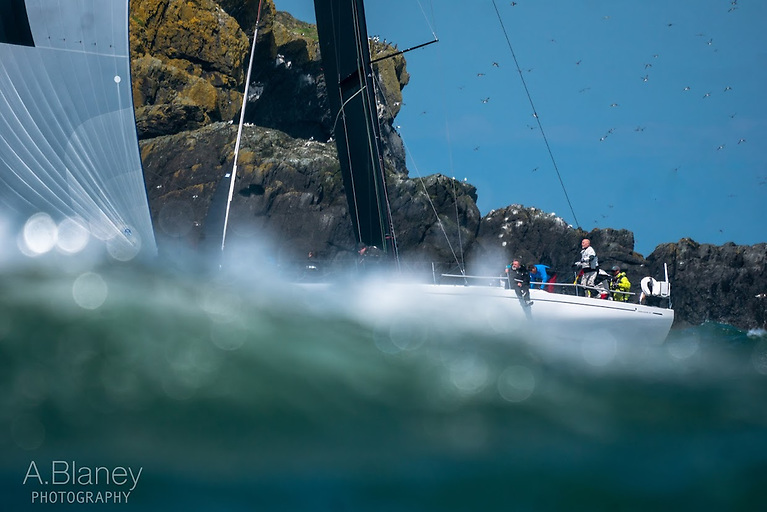 Among the highly-tuned Half Tonners in Class 2, two of the top ones – Dave Cullen’s Checkmate XV and Dave Dwyer’s Swuzzebubble – decided to sit this one out. But the former Paul Elvstrom-campaigned Half Ton World Champion King One (Dave Kelly, Rush SC) gave it a real lash in the heart of her home waters and won by 17 seconds from the Wright family’s Half Tonner Mata, which in turn was just two seconds – that’s TWO seconds – ahead of overall leader Lambay Rules, Stephen Quinn’s J/97 (HYC) 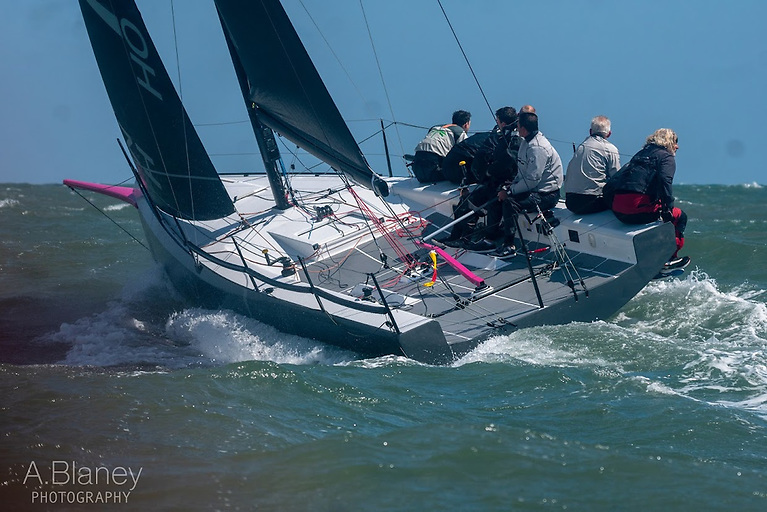 Class 3 was yet again a case of getting all the Dux in a row – the veteran Gore-Grimes X boat from Howth had it by two minutes and 17 seconds from Paddy Kyne’s Maximus, also from HYC, as too was the third-placed No Excuse (Wormald, Walsh & O’Neill).

Class 4 IRC was reduced to a select few for this demanding contest, and seasoned skipper Kieran Jameson revelled in the going with his Sigma 38 Changeling to win by two minutes from David Greene’s White Pearl from Malahide, with John Beckett & Andy George (HYC) taking third with Spashdance. 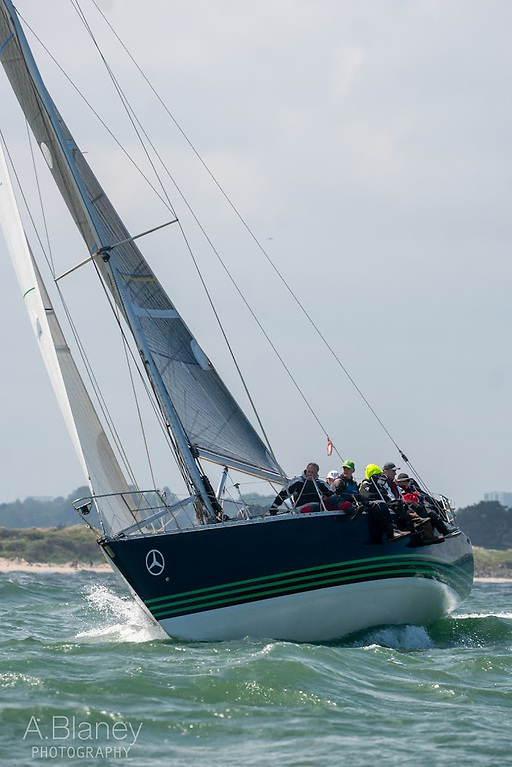 As the weather improved, the veteran Sigma 38 Changeling (Kieran Jameson) found she was in a winning position. Photo: Annraoi Blaney

Numbers were also down with Class 5 IRC, but Dermot Skehan’s MG34 Toughnut lived up to her name with an outstanding win of 15 minutes from Terry McCoy’s veteran First 38 Out and About, third slot going to Arcturus (Peter & Declan McCabe)

The only One-Designs provided with a race, the Sigma 33s proved well up to it, and current Irish champion Stephen Mullaney (HYC) was more up to it with Insider than the rest, he recorded another win. However, a new name entered the frame with Dunmore East’s David Marchant (WHSC) taking second with Flyover while Boojum from RStGYC (Stephanie Bourke and Gus Legge) was third. 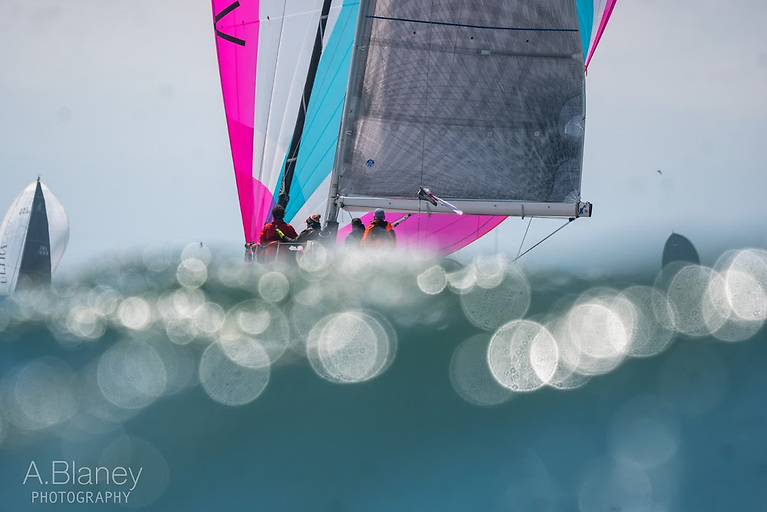 When the going became good, it was very good indeed Photo: Annraoi Blaney

The traditional way of calculating the winner of the overall trophy – the Lambay Lady – is for it to go to the winning boat with the biggest margin on the second place. On these figures, it’s Dermot Skehan with Toughnut. But past experience has shown that, with the vast array of other handicap systems being applied, a new winner may emerge some time next week.

Meanwhile, although there are some very tired crews in Howth this (Saturday) evening, Wave Regatta 2022 is far from finished. With Monday being a Bank Holiday, racing is possible until 3.0pm tomorrow (Sunday), and they may even manage three more contests before the final results are announced and some very special prizes given out.