Emily McKeown touched down twice as Suttonians swept past Galwegians on a 26-0 scoreline to be crowned the first ever Energia All-Ireland League Women’s Division Conference champions.

Stephen Costelloe’s charges completed a six-match post-Christmas winning run with a stellar four-try performance at Energia Park, the same venue where they gained their AIL status back in 2019.

McKeown, who was part of Greg McWilliams’ recent national screening camp, doubled her tally before Galwegians captain Mairéad Coyne saw yellow at the start of the final quarter, following a prior team warning.

It was a valiant effort from ‘Wegians, but a second penalty from Carroll, the Energia player-of-the-match, and a sparkling team try, run in by Catherine Martin, rounded off a dream day for the north Dubliners. 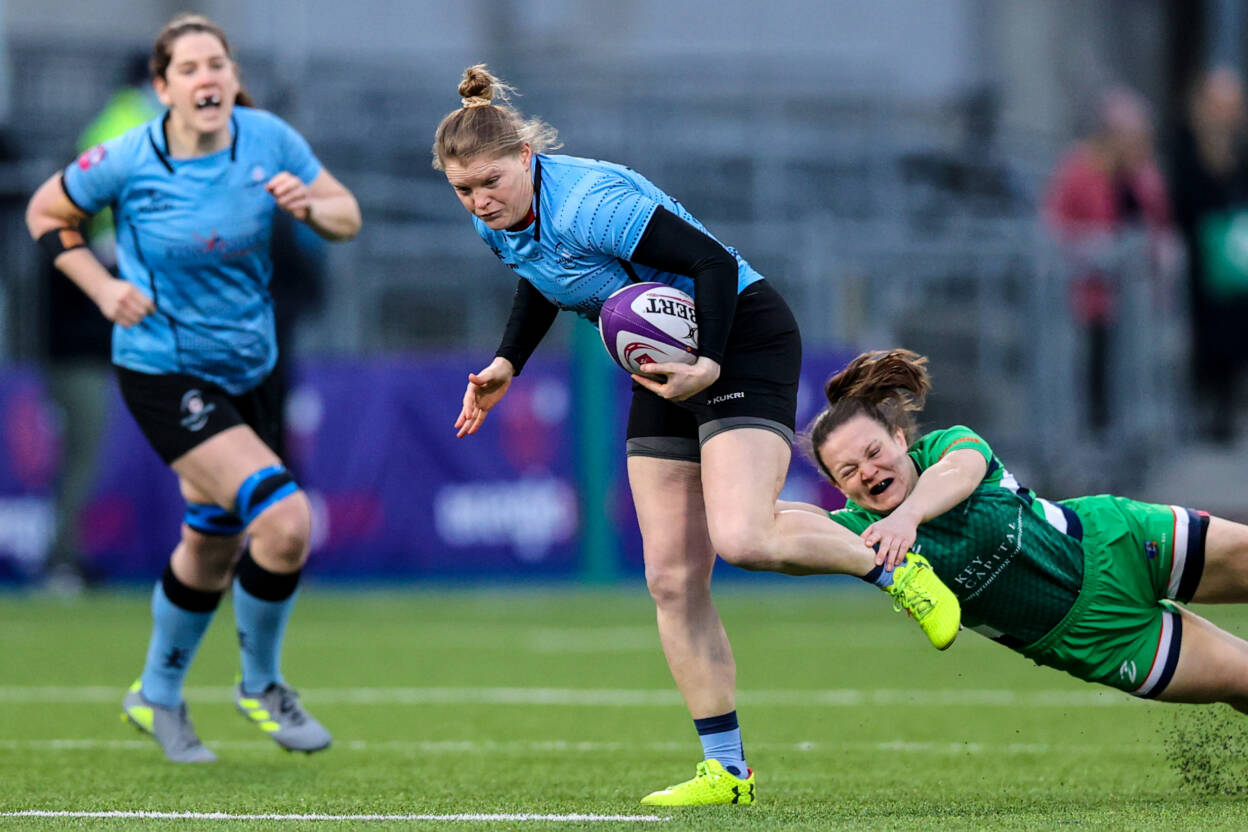 Galwegians forced the issue early on, tapping two penalties and pressing outside the Sutts’ 22 before Ursula Sammon, who replaced the injured Megan Walsh at centre, was pulled back for a forward pass.

A scrum penalty sparked the best out of Suttonians, Mary Healy and a jinking Kate Farrell McCabe both carrying well but their lineout let them down in attacking situations.

The Dubliners kept the pressure on territorially, ‘Wegians’ efforts to run out backfiring as Aislinn Layde brilliantly used Martin’s turnover to carry up close before Carroll fed winger McKeown to finish in the right corner.

The try went unconverted and although Orla Dixon earned a turnover penalty for the Blue Belles, Sutts continued to look dangerous with full-back Farrell McCabe fastening onto a cross-field kick from Carroll. 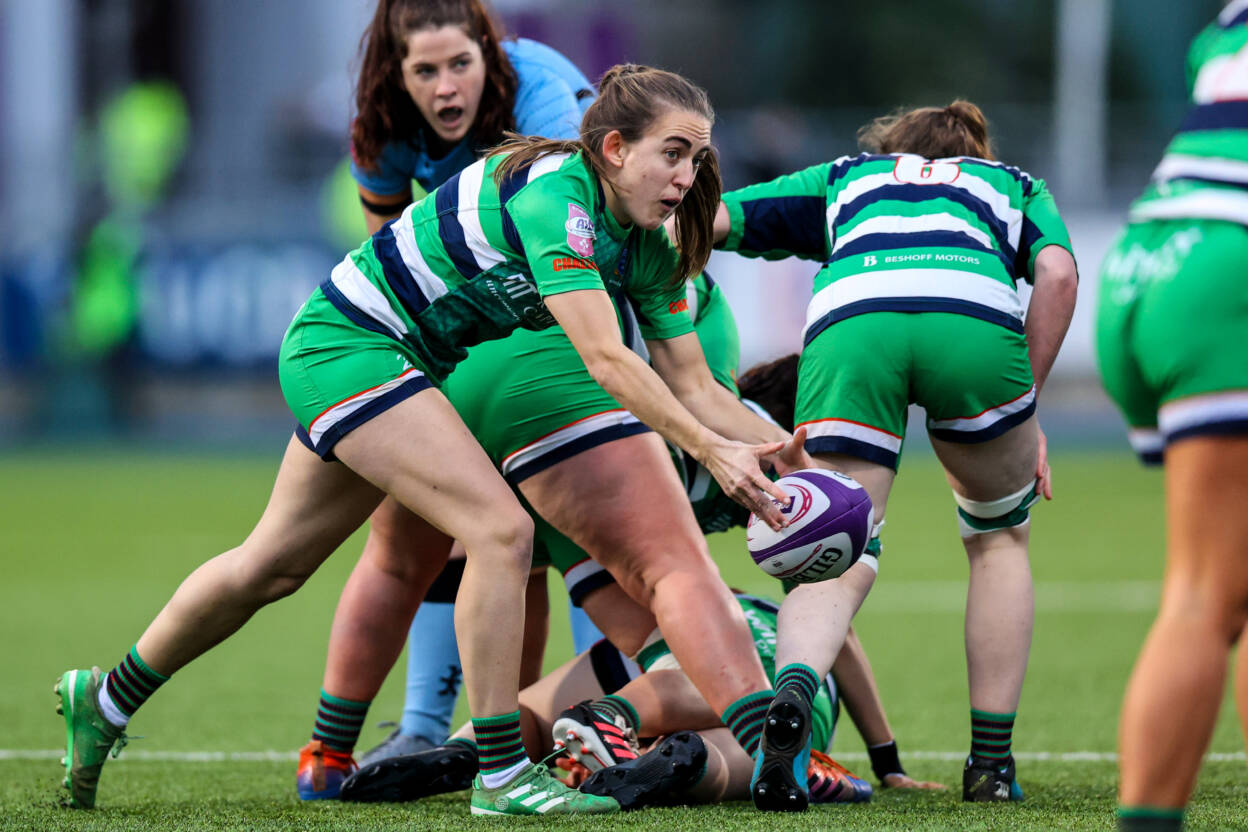 The Sutts out-half increased her influence with a penalty on the half hour mark, punishing a breakdown infringement by Fiona Scally.

Carroll then sent a more difficult 32nd-minute kick wide, having made a terrific midfield break in the build-up.

However, Costelloe’s side soon had their second try, prop Healy leaving three defenders in her wake before Carroll’s clever hands, out of a double tackle, sent skipper Farrell McCabe over from close range. 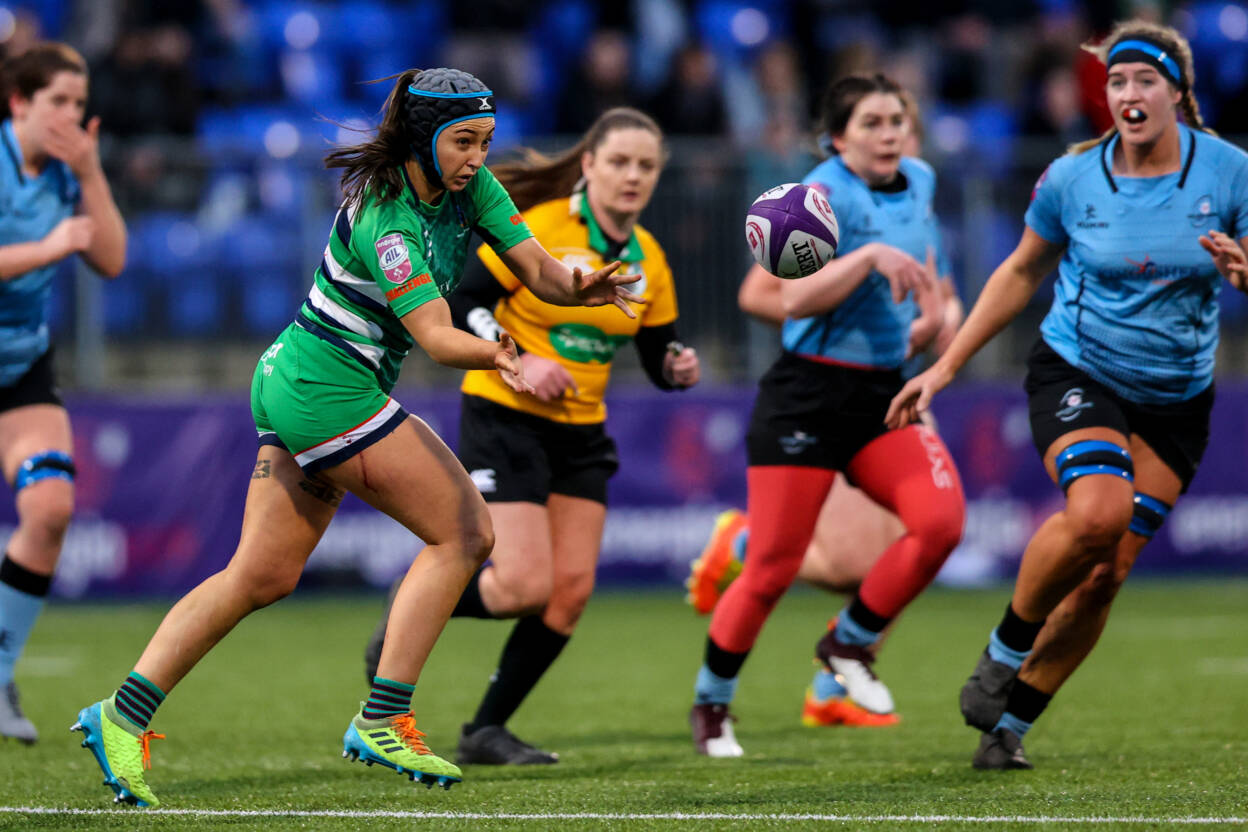 Galwegians enjoyed their best spell just before the break, with Coyne released through a gap by Nicole Fowley. The forwards were knocking on the door until Jessica Kelleher got in at the breakdown to win a relieving penalty for Sutts.

The table toppers’ pace proved too much for ‘Wegians again on the resumption, a loose kick allowing Kate Farrell McCabe to counter, tie in two defenders and release McKeown who got outside Lisa-Marie Murphy to score in the left corner. 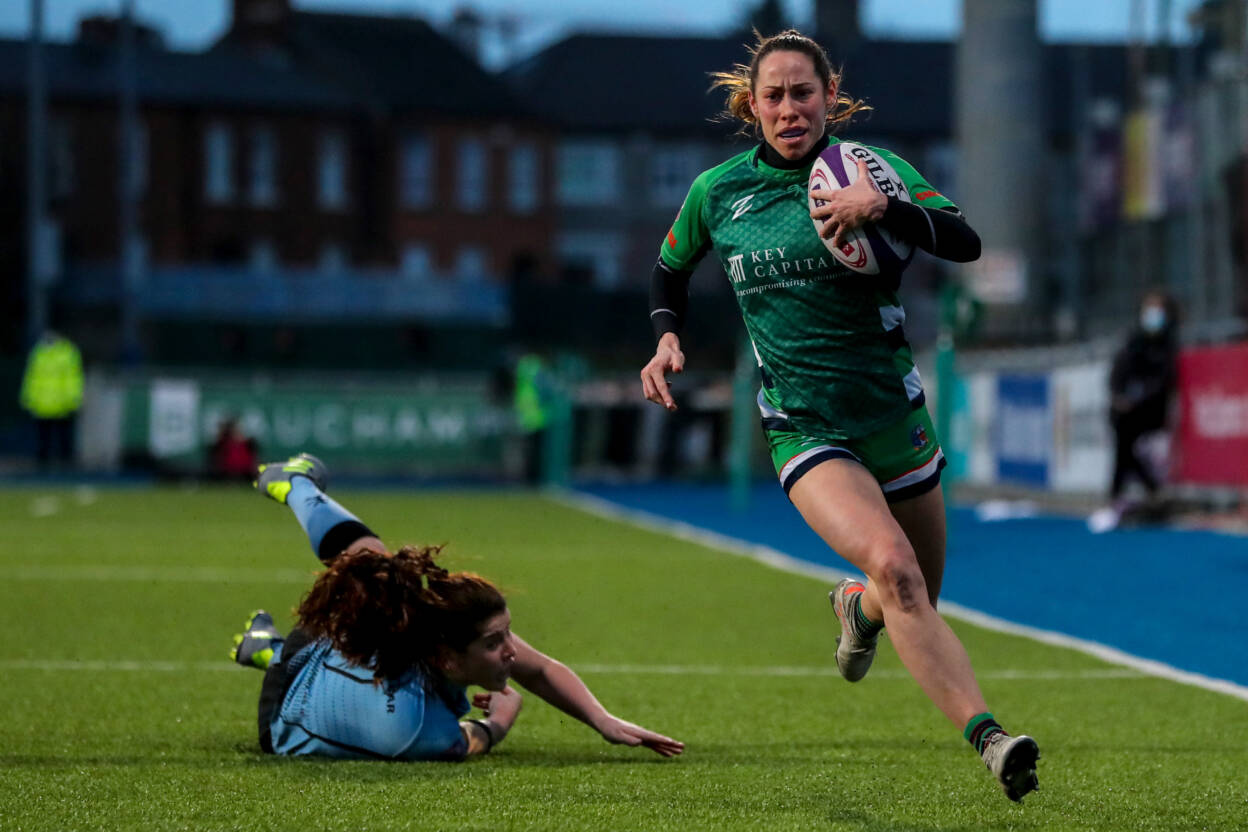 ‘Wegians continued to be starved of territory and they lost Coyne to the sin bin on the hour mark, the former Ireland international catching Molly Fitzgerald with a high tackle.

Carroll kept the scoreboard ticking over with a 67th minute penalty and she was involved in an excellent final try as Sutts showcased their powerful carrying and silky interplay.

Julia Bauer and Katie Reel provided further impact off the bench, bouncing off tackles, before Carroll, Martin and Kelleher launched a rapid right wing raid, Carroll offloading back inside for the sidestepping Martin to score. 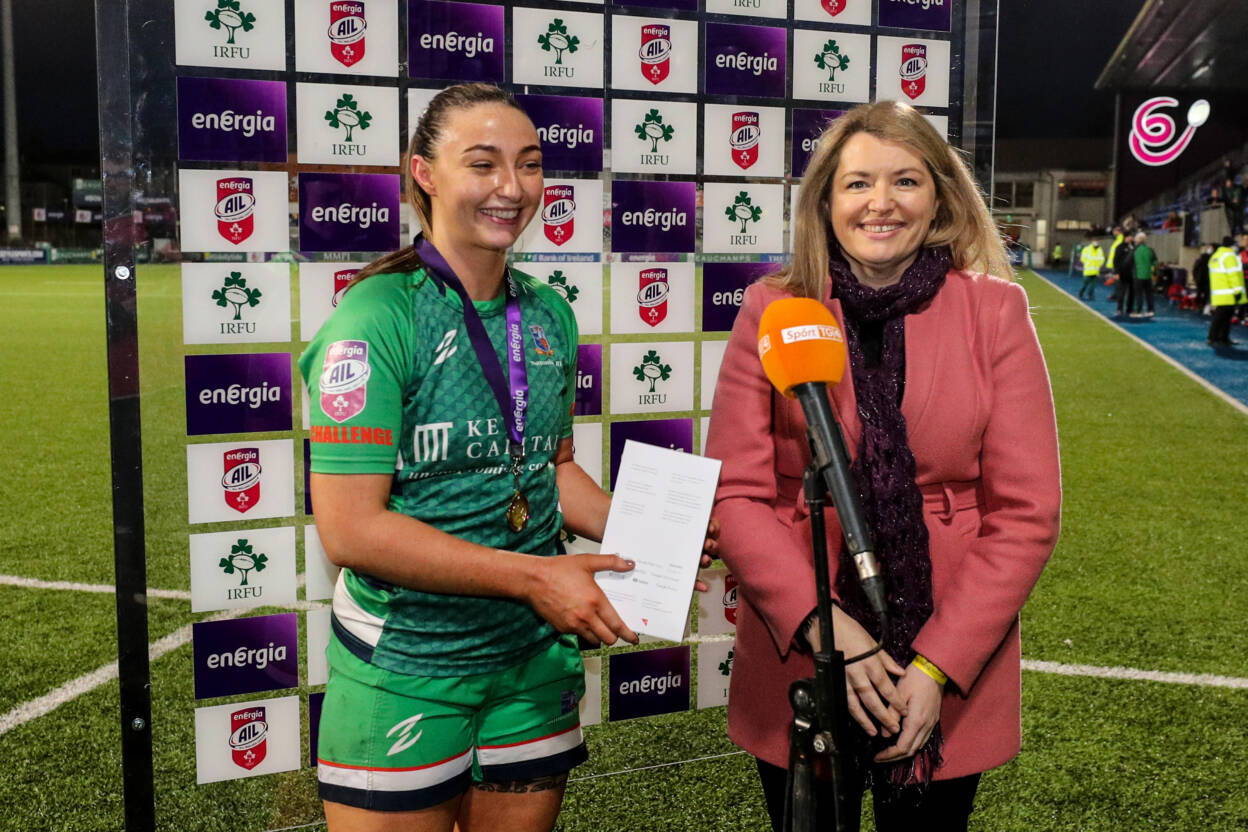 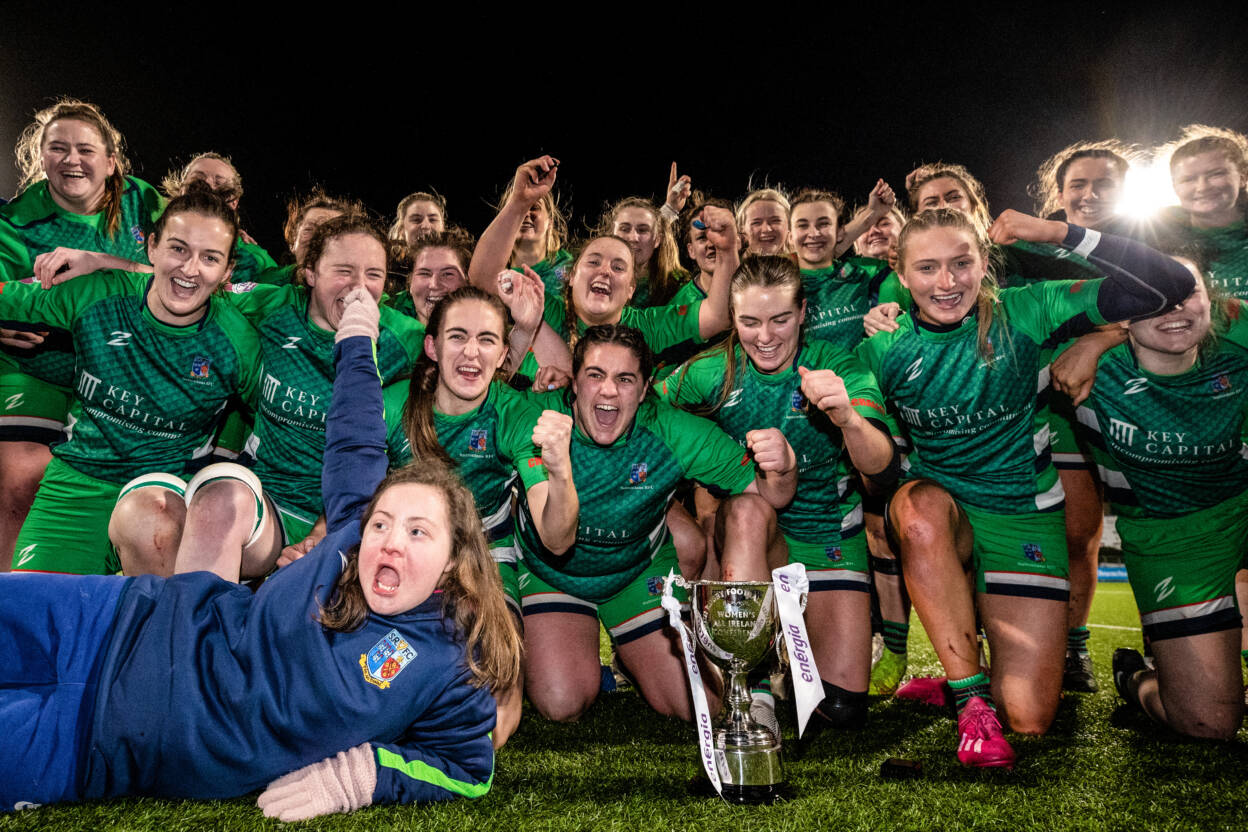