Curley as threatening in defence as in attack

Ryan Curley grabbed the glory as St Fintan’s edged past St Mary’s in a thrill-a-minute match-up.

The well-reported size of the Sutton school meant St Mary’s looked to play at a pace which their opponents weren’t used to. This was assisted by the first use of possession.

The Rathmines nursery steamed onto the ball from the get-go, using wit and width to get in behind, establishing their driving game deep inside the 22.

Eventually, sustained pressure which included being held up over the line led to a try by captain James Gannon from a tap-and-go.

This was exactly what St Fintan’s would have feared, being run off their feet by an agile, fast-twitch attack.

However, they took their medicine in plotting a way forward, the lineout opening up an avenue for flanker Tadhg O’Connor-O’Hehir to cut clean through for a try, converted by Ben Barnes for a 7-5 lead in the sixth minute.

They spurned an easy penalty in a high-risk strategy that worked out perfectly, Rory O’Connor-O’Hehir taking the ball from the base of a scrum to find his rampaging brother on his inside for his second try in the 15th minute.

Almost immediately, Rory O’Connor-O’Hehir was streaking up the far touchline, cutting inside to connect with flanker Adam Coffey, the link to hooker Simon Cantwell for a spectacular third.

Better again, they contained a St Mary’s maul, forcing a turnover but failing to find touch. The ball was returned with interest by Harry Cooke and centre Conor Cantwell’s second touch was the key to the try, full-back Cooke converting for 17-12 in the 24th minute. 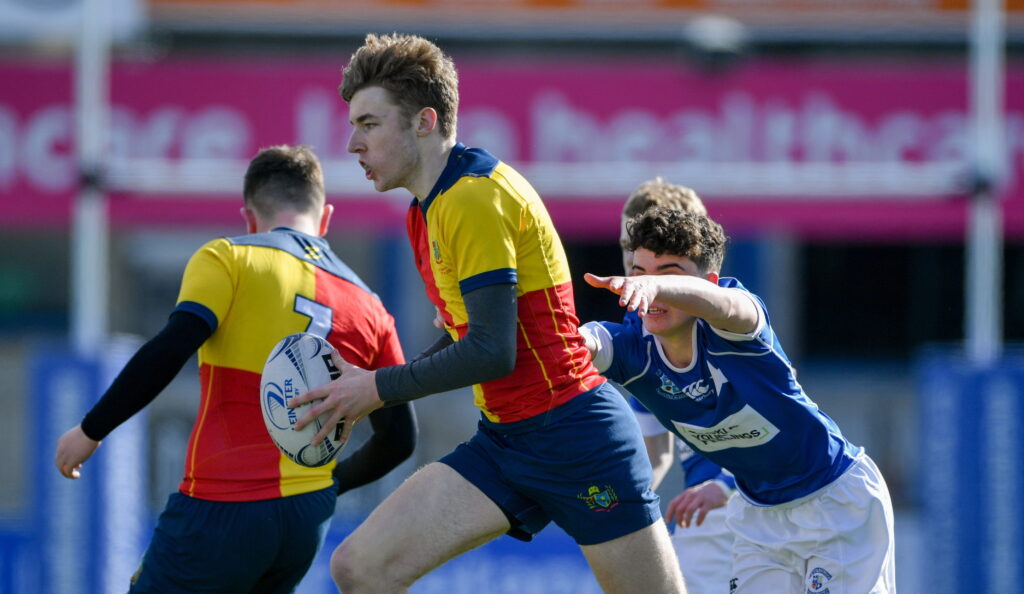 The sheer bulk of St Fintan’s was allied to movement and skill, prop Ponamu Palazzetti next to breach the defence from close range for Barnes to add the extras for 24-12 at the break.

It would take all of St Mary’s ingenuity to turn it around. It didn’t help that St Fintan’s centre Marcel Haas was in to claim a penalty on the floor when the defence was stretched.

The ploy to tire out the bigger boys was understandable, out-half Paul Neary probing well enough for wing Matthew Morrissey to break free for a try, converted by Cooke in the 37th minute.

The flow of St Mary’s was becoming a problem, a lineout leading to an all-out assault on the line, Conor Cantwell taking a clever angle onto the ball for his second try, Cooke’s conversion making it 26-24 in the 40th minute.

Full-back Rohan O’Shea’s mazy run was countered by Conor Cantwell’s long ball out of defence as a breather to the non-stop action.

Gradually, St Fintan’s regained their composure, moving with stealth until indiscipline cost them ground and Gannon nabbed a penalty at the breakdown.

Just when it seemed the chance was gone, Curley set off up the left and a mesmeric attack, involving backs and forwards, ended with Rory O’Connor-O’Hehir offloading to Kelly for a spectacular try, converted by Cantwell in the 58th minute.

And still, it wasn’t over. St Mary’s came one last time, their forwards employing the pick-and-go all the way to the line where they were held up to signal the end of a titanic tussle.

This outstanding win sees St Fintans into the quarter finals of the JCT and all eyes will be set for next Thursday, March 10th in Energia Park (aka Donnybrook) when St Gerards will provide the opposition.

Will  keep you posted @ JustLocal